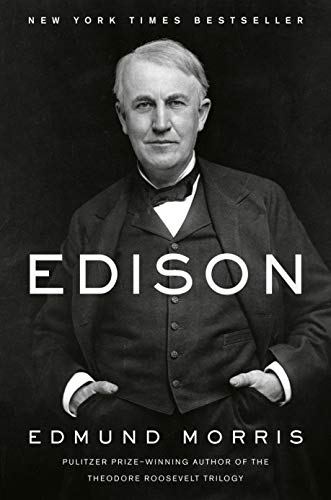 Thomas Edison was born in the years before the American Civil War, and as a lad came under the thrall of popular writings on electricity. The phenomenon had only recently evolved from spooky mystery thing to moneymaking entity. In the form of the commercial telegraph was forming the basis for new industries and ways of life in the United States. As a boy in Port Huron, Michigan, he muddled through some schooling, became a news boy, and then a telegraph operator as the Civil War commenced.

He used his time. Riding the rail running from Port Huron to Detroit, and he began to produce his own paper in a baggage car on the train. In Detroit between the morning and evening trains he’s go to the Young Men’s Society Reading Room (public library) and commence to read every book, starting at the beginning of book shelf (that’s something I heard, not something detailed as such in the book we’re going to look at here). Read Les Misérables, Robert Burden’s The Anatomy of Melancholy, the Penny Encyclopedia. And perhaps Newton’s Principia Mathematica. Although he probably didn’t comprehend its contents. He would rummage around the city, bartering for or commandeering refuse copper, which he fashioned into electric batteries and components in the evenings back in Port Huron.

From the very first, Edison had a penchant to ponder the ramifications of telegraph transmission and all the complementary components involved. His wondering upon the problems of long distance induction and interference that disrupted the transmission of signals led to enhancements, improvements and breakthroughs that changed the fabric of modern life.

Edison’s position as the image of the inventor may fade, as the next generation fixes on new icons of invention such as Steve Jobs or Elon Musk. That makes Edmund Morris’s recent (2019) biography particularly welcome.

It is welcome even though the book has a hurried feel, with only some of the prose majesty exhibited in earlier Morris works. Maybe it is wrong to suggest he rushed to completion due to failing health – Morris completed the book just before his own death. Edison has some of a spectral, episodic quality and is less solid by far than Morris’s remarkable and award-winning biography of Edison contemporary Theodore Roosevelt.

Yet, the book is indeed a valuable addition to the copious collections already devoted to Edison, the archetypal inventor of the first commercial age of electricity.

He was a principal wizard behind the lightbulb, phonograph, cinema, significant improvements to battery technology as well as the telegraph and telephone, and a dizzy string of more forgotten contraptions. A self-taught polymath, he is noted here as a man of amazing concentration. He could look intently at what the world lay before him – and was able to uncover deep first principles as he tinkered with pieces of metal, carbon, vulcanite, lamp black and assorted materials.

More than that, he had a gift for imaginative re-application of principles to conjure new products, and improve on existing successes. This was all to result from long nights and extended work stints.

His schoolteachers considered him slow, and he set out to work along the railroad, itself a new invention. Edison was a fast copyist, a task he learned in his days as a railroad telegraph man. This was during the Civil War, when telegraphy was becoming increasingly important as a media for the country. He’d practiced, becoming a fast transcriber. In this he acquired the aspects of an automaton – an entranced taker of code, rather than words. By 1863, as a 16-year-old, he was eligible for the Civil War draft, but with the job of sparker, or lighting slinger for the telegraph company, he avoided the Civil War draft. Instead, he conveyed the messages of soy prices, battles and death.

At one point, as night operator on the Grand Trunk railroad, he nearly lost his job, having nearly signaled two trains into collision. The work involved monitoring the movement of trains by means of telegraphic messages exchanged with other stations along the line, a kind of thing that continues to be an intrinsic fascination for high tech. He persisted

Morris suggests Edison saw Newton, Franklin and Faraday as exemplars, but held that all inventions were in fact rediscoveries that could be found in the reorganization of primal matter. His Edison stands as the classic paradigm for the lone inventor, at the same time he comes to stand as well for the more modern model of an inventor as part of an organization.

He was also involved in technology as a business, and was not shy about touting his vision in the media of the day. There are echoes of Edison in the efforts of Jobs and Musk, both of who’s learnings and interests were wide in terms of technology, business and marketing.

One cannot review this book without pointing to an odd conceit in Morris’s narration. He tells Edison’s life story backwards. As with the odd techniques he applied in his biography of Ronald Reagan (“Dutch”), the effects do not shed any special light on the subject, and tend on the main to disconcert. We’re sure that others will, as we did, read the book backwards to achieve a familiar chronological sequence.

While Edison was impressively interested in discovery, as a person, he erected shields to block discovery of what made him tick. Successes and failures made him wealthy and catch-as-can. In his love life, in his family life, with his lab buddies or his worldly business friends, he left little to evidence his innards. We would have to leave a judgment on Morris’s forensic success here to others — but suggest he should get an ‘E’ for effort.

A story from his childhood seems to provide a ghostly electric clue. At about the age of 10, Edison goes to the creek with young friend George Lockwood, who disappears in the eddies to drown. Edison observes the creek water for a long time, maybe rapt by the dying Lockwood’s breath bubbles. At last, after the long wait for Lockwood to surface, Edison finally goes home to dinner and to bed without telling anyone about the event. Meanwhile, a party searches for Lockwood – eventually they come to hear Edison’s story of his drowning.

Of course, given the reverse order telling, this early life story occurs at the end of Morris’s chronicle. To me it seemed to explain a lot, while maintaining the veiling of the real Edison.

We read the brunt of this book during the contentious 2020 presidential campaign, which was nearly derailed by controversy around voting processes and voting machines. Funny to find out that Edison’s first patent (granted during his days in Boston) was for an electro-chemical vote recorder.

The device was meant to speed up the laborious process of vote counting in legislative bodies, and used electricity to do this. He called it his record-o-graph. As it turns out, speedy voting was not a ‘must-have’ for politicians in the passing of legislative bills, and the work was much for naught.

Edison resolved, going forward, that he would focus efforts only on things that people wanted to use. He was seldom off that mark.

What we take away from the book is a mark we will look to apply to dissection of technologies here at the Progressive Gauge atelier — there is no technology without useful case. – Jack Vaughan